Liraz is a well-known Israeli musician and actress based in Tel Aviv.
For her wonderful mix of electro-pop, which meets pulsating dance rhythms and retro sounds from Persia, Liraz worked online with composers and musicians from Iran, who had to remain anonymous for security reasons.

Liraz ‘family, Iranian Jews, moved to Tel Aviv in the 1970s. Although Liraz grew up in Israel, she always believed that "my culture is Iranian". When she moved to the US for three years to work as an actress in major film productions such as 'A Late Quartet' and 'Fair Game', she had something of a revelation. She found a huge Iranian community in Los Angeles: “There are millions of Iranians here, so many that I started calling them Tehrangeles. Suddenly I felt I belonged somewhere else besides Israel. I heard the music from before the revolution and started collecting it. Some of it came from women who did not stop singing like they should after the revolution. They left Iran so they could move on and I heard the courage in their voices. This made me realize that I didn't want to act, but rather sing."

And this she did. Liraz ‘music is underground music in the best sense of the word, political pop music, a mixture of traditional Persian instruments, club beats and call-to-action melodies. 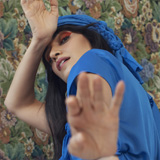